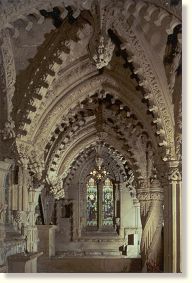 Rosslyn Chapel is a beautiful, ornate 15th century medieval chapel near Edinburgh, the capital of Scotland, built in 1446 by Sir William St. Clair, third and last prince (Jarl) of Orkney. It is renowned for its famous stone carvings, which are some of the finest in Europe, and many of which relate to the symbolism of the Old Testament, Freemasonry, the biblical Apocryptha, etc. Rosslyn Chapel is, in fact, only part of what was intended to be a larger cruciform building with a tower at its centre. Though incomplete, it took 40 years to build, and has the largest number of Green Man carvings of any medieval chapel in Europe. Sir William, the brilliant founder of this magnificent chapel, appears to have been the Architect, overseer, and Works Master of this project, taking the utmost care regarding the building’s design – he is known to have personally examined each carving in wood, before he allowed it to then be carved in stone. After Sir William died in 1484, he was buried in the unfinished Chapel and the larger building that he intended was never completed.

Many claims, suppositions, and theories add to the aura of intrigue and mystery about Rosslyn Chapel. It has been suggested as the repository for many artifacts, including the lost Scrolls of the Temple, the Ark of the Covenant, the Holy Grail, and the true Stone of Destiny. However, many, if not most, of such theories remain as pure speculation.

In the early 14th century, the Pope had excommunicated Robert Bruce, (Robert I) the king of Scotland, because the Scots would not recognise Edward II of England as their king. So, Scotland and Portugal were the only two countries in western Europe where the order was not proscribed – understandably leading to speculation about possible survival of Templars. Some are known to have joined other Orders, such as the Portuguese Knights of Christ, after the Templar suppression in France. ‘However, while most of the carvings have clear-cut explanations within a medieval context, a few do still remain rather enigmatic, partly because they may be rather badly damaged due to the ravages of time, thus rather unclear, and /or,  also partly because some of the iconography in the chapel can properly be interpreted in a number of different ways, a problem that occurs in art history and architectural studies. The Lamb of God of the apocalypse, for instance, does occur in a number of Templar buildings on the Continent, but it also occurs in many other non-Templar buildings as well. Still others still remain a mystery, and many of us are yet engaged in research to unravel this fascinating puzzle today.

So, one simply cannot ‘jump to conclusions’ regarding such matters. In fact, in my view, Rosslyn Chapel cannot – and perhaps never should be – merely put in a ‘box’….it is far too extraordinary for that.  Many are, and will be, still engaged today in further research about this extraordinary medieval building. But today, it is also a living Scottish Episcopal church community as well, and the chapel and its ground should be respected as such. Please, if you do visit the chapel, be considerate of its important legacy for posterity.

It has also been suggested that the Mason’s Pillar and the ornate Apprentice Pillar, for which Rosslyn is famed worldwide, represent the pillars of Boaz and Jachin, which stood at the inner porchway of Solomon’s Temple in Jerusalem, and that Rosslyn Chapel may be a reproduction of that temple. Masonic scholars today are conducting groundbreaking research and we await their conclusions. Others believe the plan of the building is instead based on Herod’s temple, and still others believe it is actually based on the second temple of Jerusalem – that of Zerubabbel. This is because the only written words carved in the chapel are “Kings are strong, wine is stronger, women are stronger still – but, strongest of all, is Truth”. Those words are also the only words recorded in the biblical apocrypha as having been spoken by Zerubabbel himself. Parallels have been drawn between the story of the Apprentice Pillar and the murder of Hiram Abiff, master mason at the building of the temple of Solomon, who was struck down by a blow to the head like the image of the apprentice in Rosslyn Chapel. However, like much of the symbolism in Rosslyn, such legends of a talented builder being murdered by a jealous master are not necessarily  unique to Rosslyn Chapel, as they are also found in many other medieval buildings as well, such as Rouen in France.

Many people ask me whether or not an actual excavation will be done, and if so, when. The answer to this question can best be explained by the Director of the Rosslyn Chapel Trust, who says that due to the Scottish law of the “Right of Sepulchre”, a rather lengthy legal procedure would have to be followed, in order to secure the necessary permission to dig on the church grounds by the authorities. Meanwhile, the focus is on preservation of the building, and not on excavation – at least for the moment. Many other fascinating aspects of Rosslyn Chapel remain to be explored but, if possible, this magnificent chapel should be seen at least once in a lifetime….

This select bibliography does not aim to be comprehensive, but to suggest major works on this topic, both popular and academic, and from a variety of perspectives.

For a detailed, more comprehensive listing of many bibliographic sources – both academic and general sources – on Rosslyn Chapel and related topics, including books, journal articles, and periodicals, please see the extensive bibliographies, Reading Lists and Appendices in Medieval Mysteries,  Ibis Press/RedWheelWeiser, Lake Worth, FL, 2014,  Gothic Cathedrals: History, Art, Places and Symbolism,  Ibis/RedWheelWeiser, Lake Worth, FL, 2015, and  The Knights Templar Encyclopedia,  The Career Press, NJ, 2007,  all titles by Dr Karen Ralls.

Ancient Quest, and Dr. Karen Ralls, do not necessarily agree with, or endorse, material in the publications noted above, but provide this list as a general introduction to learning more about this topic.